“CD Reiss writes the most delicious suit wearing alpha men (my catnip!) and Logan Crowne is no exception. This opposites attract marriage of convenience is a delight from beginning to end.”

Fall in love with a brand new CD Reiss alpha, Logan Crowne, in Crowne of Lies, an all-new marriage of convenience standalone by the New York Times bestseller, now! 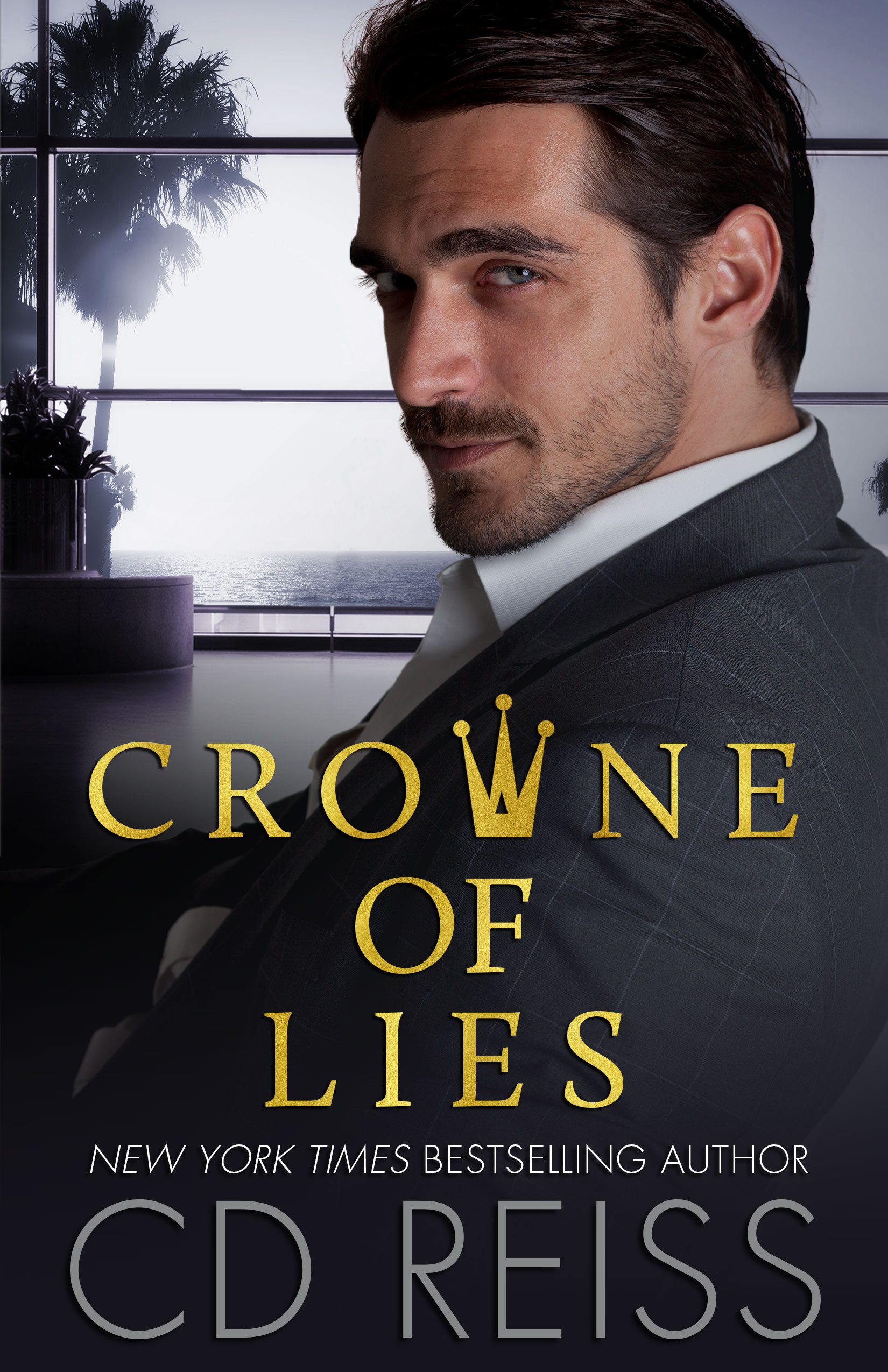 Twelve months living in his house, holding his hand, wearing his ring on her finger, and in exchange, she’ll get her father’s company in the divorce settlement.

They have one year to convince his skeptical parents that they’re happily in love, and he’s settled enough to run Crowne Industries.

Ella wants the company badly enough to live with a man who will never love her. She’ll sleep in his room and kiss him for show.

Her heart may melt whenever he’s around, and his touch may ignite a fire inside her, but surrender will break her heart.

She’s sure she can last a year without giving him her body.

Download your copy today or read for Free with Kindle Unlimited! 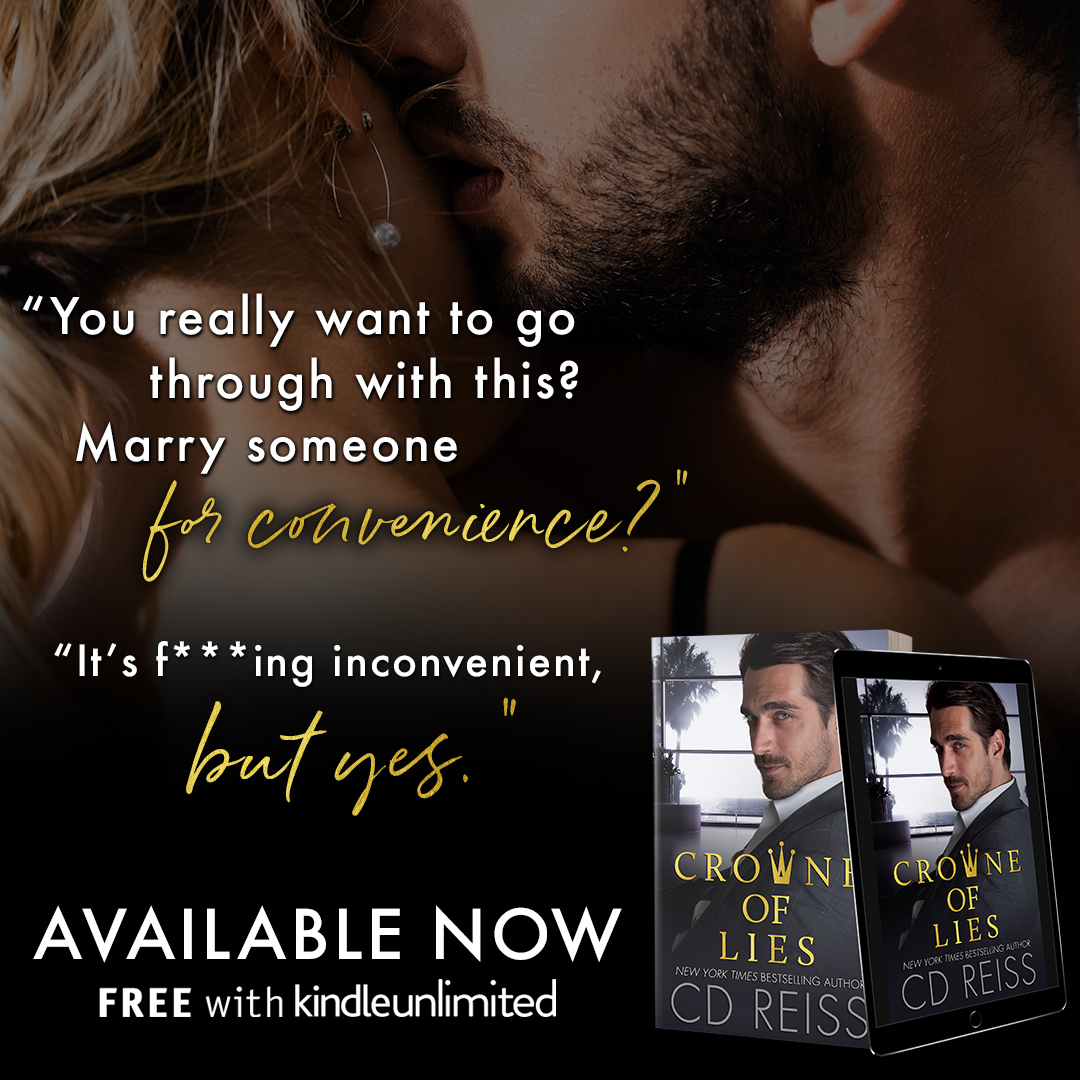 “I don’t think your mother’s convinced,” I said, letting him lead our dance. He glanced up at his parents, then back at me. “Let’s fix that.” When he leaned down to kiss me, I put my hands flat on his chest. Logan wasn’t my type. He had things I needed now, but nothing I wanted for the future. I’d die of boredom with him, and I was clearly not what he had in mind when he imagined a happy marriage. But some things needed to be said out loud. “Wait,” I said. “We have to get divorced at some point, and…” I paused to organize my thoughts and failed. “There’s a lot of kissing and… it’s necessary. I understand. But the thing is…” I stopped myself, meeting the cool blue of his eyes. “I don’t want you to get confused.” “About what?” “We’re getting divorced.” Anyone who heard his laughter without hearing what we were talking about would have thought he was delighted with the woman he loved. “Yes, Estella. We’re getting divorced.” “No feelings,” I said. “Right?” “None whatsoever.” “Okay. Kiss me.” It must have been the champagne and the music. Definitely the way his arms held me so tightly, rocking back and forth with the rhythm. No feelings, sure. But Logan kissed like he meant it, and the champagne fizzed inside me, bubbles popping up from the base of my spine, shaking long dormant nerves awake. His hands stayed in an appropriate position, but all I wanted was to feel them stroke lower, deeper, where I shuddered with desire. “Stop,” I said, pulling away. “You all right?” “Fine, just… I need a second.” “You’re flushed.” He brushed the backs of his fingers along my cheek. “That’s how I know you want to fuck. Make a note.” He spun me away and rolled me back. “How do I know when you want to?” “You’re in the room.” I laughed. It was such an act. So fake. So over the top, yet when he guided me in the dance with a smile on his face, I let myself live it. For one dance, then two, we were at our most convincing, acting as if there wasn’t another soul for miles. He looked at me as if he wasn’t faking it, and when he kissed me, I kissed him back as if it was all real. The music stopped as another round of trays came around. “Are you hungry?” he asked, running his lips along my neck. “There’s a room with dinner somewhere.” “We should mingle. I don’t want to make a bad impression.” He looked away, then back at me with a heat I didn’t expect. “If they could see what was in my head, they’d be impressed.” “What’s in your head?” “Getting my hand under your dress and finding out if you’re wet.” “Logan,” I scolded in a hiss. “We just said—” “We said no feelings.” He took me by the chin. “If I took you right now, fucked you raw, gave you a dozen orgasms and came deep inside you, it would mean nothing to me.” My panties were soaked through. “Me neither.” He looked over my shoulder as if he needed a moment to think, then found my hand and squeezed it. “Come.” He pulled me off the dance floor. “Where are we going?” We went down a stairway we hadn’t before, past a security guard, and into a closed hallway with double doors at the end. He pushed me into a wall with a kiss that wasn’t like the others. It was thoughtless, reckless, uncontrolled. It was a cyclone of desire I was already caught in, spinning upward, limp-willed with the force of it, because it was my whirlwind too.

About CD Reiss CD Reiss is a New York Times bestseller. She still has to chop wood and carry water, which was buried in the fine print. Her lawyer is working it out with God but in the meantime, if you call and she doesn’t pick up she’s at the well hauling buckets. Born in New York City, she moved to Hollywood, California to get her master’s degree in screenwriting from USC. In case you want to know, that went nowhere but it did give her a big enough ego to write novels. She’s frequently referred to as the Shakespeare of Smut which is flattering but hasn’t ever gotten her out of chopping that cord of wood. If you meet her in person, you should call her Christine.

Sign up to hear exclusively about audio releases and sales: https://cdreiss.com/AudioAlerts