“Inked in Lies has just nudged its way onto my top readers of 2020 list. This emotional rollercoaster is beautiful, steamy, and utterly breathtaking! Darling has brought her A-game, and delivered a story that packs a whole punch and so much more!”– Dani René, USA Today Bestselling Author

He moved in next door. Handsome as sin, older in a way that meant forbidden. He had tattoos on his hands and wickedness tucked in his grin. I was a goner as a girl to a man they called Casanova for a reason. He would never love me, at least not the way I needed him to. I tried to move on. But I couldn’t turn my back on him or The Fallen MC. So when they needed me most, I offered the only thing of value I could use to help them. My body. And when helping them meant putting my life on the line, Nova had to decide just how much he was willing to do to get me out alive. 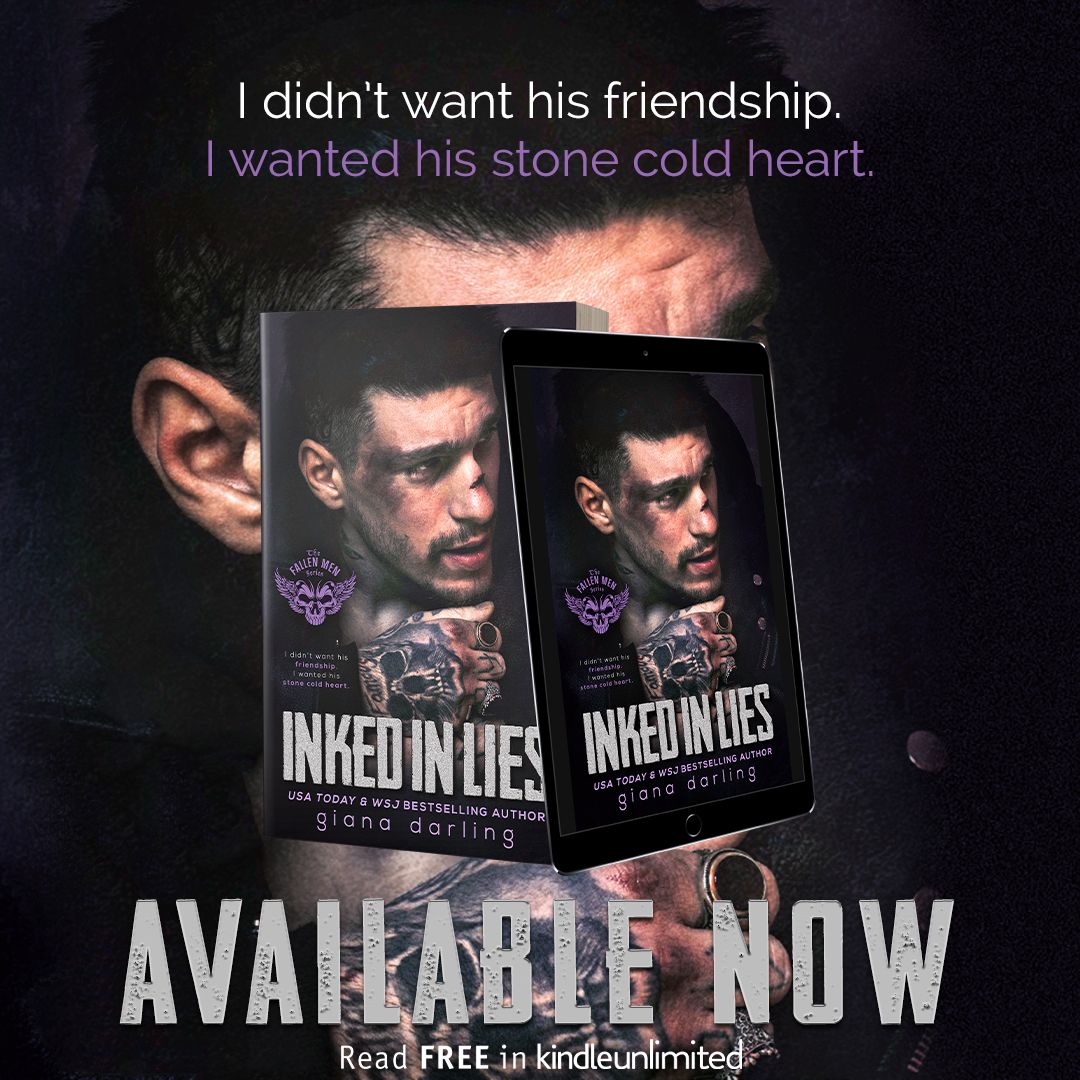 It was a heady fuckin’ thing, bein’ someone’s sunshine, their rain, their entire ecosystem. But it was dangerous too. ’Cause I would raze that all to the ground with one wrong move, one of my stupid mistakes. And it would be gone, laid to waste forever. This was better, rippin’ out the weeds of romanticism I’d been so stupid to sow in her heart. The other stuff, with time, would survive. We’d always be family, and eventually, we’d get back to our friendship. Two years hadn’t ruined us, what was a few more in an effort to heal her heart and give her the chance to win someone better? I sat on the edge of the bed, dressed, boots tied, hands in my hair ’cause I couldn’t shake this feelin’ I was bein’ a fuckin’ dumbass for endin’ it even though I knew it was right. “Sneaking out?” she whispered. I looked over my shoulder at her, the sheet clingin’ to the curve of her hip, the flowers I’d inked on her back vivid against her dark skin and the white covers. My fingers twitched to trace them. “Nothin’ about this is easy, Li,” I admitted. “I feel like I’m hurtin’ you if I do, hurtin’ you if I don’t. I’m just tryin’ to find the best option here. You might not believe it, but I’m tryin’ to do what’s best for you.” She blinked up at me, those wide, long lashed eyes that had stared up at me for years, so trustin’ and lovin’ were now shuttered, guarded against me. My heart rattled against the cage of my ribs, strugglin’ to get out. To get to her. “I know you think you aren’t good enough. I know you’ve always had that kernel of doubt about yourself because you were different, and growing up, people told you that made you bad. I know Meredith solidified that for you. But I want you to think it about it like this,” she took a deep breath, and I braced for her words. “You saying your not worthy enough? It’s like me saying the same just because Ignacio is my father, and I have his blood. I choose every day to be better than what he gave me, Nova, even though he’ll always be a part of me. You could make the choice to be better than what you think you are, for me, if you wanted.” She had a way of sayin’ someone’s name like that. The same way she said the names of flower varieties, as if each word itself was a novel, and she was tryin’ to convey a summary of the entire thing in one word. I’d memorized the way she said Nova, as if it was the great novel ever written. As if it was a sacred text she’d studied, runnin’ her hands over the pages until they went cotton smooth with use and lovin’. I wanted to be that for her, to try for her, to love her better every day, but how selfish would it be to keep her in this life of mine? Lou and Z had been separated for months by prison, Cressida had lost her King. Wouldn’t I just be condemning Li to a similar fate somewhere down the line? “You know, Nova, I’ve loved you all my life. Since the day I first saw you across the street stepping out of that minivan, I thought you were the most beautiful thing I’d ever seen.” She laughed softly, and I thought I’d never heard a laugh so full of grief and mourning. “But for a pretty boy, you have an ugly heart.” “Lila,” I started, but my voice was wrong, strangulated by the cobra of emotion twined around my throat, squeezin’ the life outta me. “Don’t say that. Not you. I’d fuckin’ rip out my own heart to see you safe, to see one fuckin’ smile on your face.” She was so fuckin’ lovely in her despair, tragic in a romantic way like Juliet before her Romeo. Of course, even my Flower Child made heartbreak look pretty. “That’s just it. You could make me smile every day for the rest of my life so easily. All I’ve ever wanted was your love.” “I love you,” I said instantly, but the words fell flat and heavy when they should have soared, hollow and cheap as a children’s toy dropped to the floor. “Not enough,” she declared with a sad kind of triumph as if I’d put her outta her misery in some horrific way. As if she’d just been waitin’ for me to disappoint her all along. “Not enough,” she repeated softly. “Not enough to even try.” I watched her with my heart in my goddamn throat as she got up, naked and glorious as a nymph crossin’ my path, and went to the bathroom. Before she closed the door, she turned to me and said, “I hope you’re gone when I come back. And you should know, this time? I’m not waiting for you.”

About Giana Giana Darling is a USA Today, Wall Street Journal, and Top 40 Amazon bestselling Canadian romance author who specializes in the taboo and angsty side of love and romance. She currently lives in beautiful British Columbia where she spends time riding on the back of her man’s bike, baking pies, and reading snuggled up with her cat Persephone.